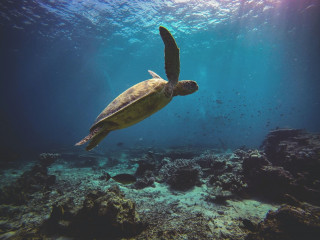 First conceived in 1992 by the Canadian International Centre for Ocean Development (attending the UN Environment and Development Conference), World Oceans Day came into force in 2008, following lobbying by the World Ocean Network and The Ocean Project.

Celebrated annually on June 8th, in 2021, the day will be marked by a message from the UN Secretary General, Antonio Guterres, along with a host of local events organised in schools, universities and other academic institutions and zoos, amongst other places.

With the main purpose being to highlight the crucial role oceans play in sustaining life on Earth, each year’s theme brings different areas into focus.

Previous themes include 'Healthy Oceans, Healthy Planet’ in 2015, ‘Our Oceans, Our Responsibility’ in 2009 and 'Innovation for a sustainable Ocean’ in 2020 (a virtual event due to the Coronavirus pandemic).

In 2021, the day’s events will again be celebrated virtually.  The theme of 'Life and Livelihoods’ will highlight the biodiversity of marine life that the oceans support, the economic opportunities that exist and the need to further develop a balanced and sustainable approach to humanities relationship with the ocean.

“A new era of ocean exploration can yield discoveries that will help inform everything from critical medical advances to sustainable forms of energy. Consider that AZT, an early treatment for HIV, is derived from a Caribbean reef sponge, or that a great deal of energy—from offshore wind, to OTEC (ocean thermal energy conservation), to wind and wave energy—is yet untapped in our oceans.”
— Philippe Cousteau, Jr.

In 'Why Exploring the Ocean is Mankind’s Next Giant Leap', contributed to CNN 'Lightyears Blog' (13 Mar 2012).

In line with the 2021 theme, World Oceans Day will link to the UN Decade of Ocean Science for Sustainable Development, running from 2021 to 2030.  This decade long event will seek to develop international partnerships in scientific research and innovation which will connect the needs of society with conservation of the oceans that fuel our lives.

Over 40 million people will be working for an ocean-based industry by 2030.  Join them:

Careers in Marine and Ocean Science

Jobs in Water Sciences and Technologies

The UN Decade on Ecosystem Restoration