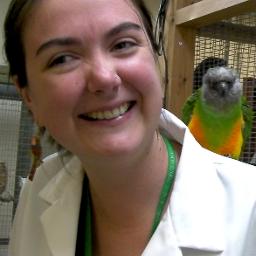 I am investigating learning and exploration of motor actions in parrots. My supervisor is Dr. Jackie Chappell. My 4-year project started in 2008 and is funded by the Biotechnology and Biological Sciences Research Council (BBSRC)I will capitalise on the strong exploratory and manipulatory tendencies of parrots to investigate their mechanisms of learning about objects and affordances. First, controlled laboratory experiments will be used to test parrots' abstract knowledge about the physical properties of objects and physical laws. If parrots rely upon associative learning alone to overcome a problem then they would learn only task-specific solutions. If, however, parrots understand abstract physical and causal principles governing one task, they may be able to transfer these principles flexibly to novel tasks that require the use of similar principles. Furthermore, parrots are highly social birds, so it is possible that individuals could acquire a functional understanding of a task just through observation of a skilled demonstrator performing the same task. In order to test this, similar experiments will be performed in a social learning context to see if the parrots' functional understanding differs in quality or extent from individuals that have previously performed the task itself.

The second component of the project will investigate the ontogeny of physical cognition by breeding parakeets (red-fronted kakariki Cyanoramphus novaezelandiae) in captivity and studying the development of their cognitive abilities through a series of tests administered at regular intervals throughout the nestling and juvenile period. In addition, one group of juveniles will be exposed to an 'enriched' physical environment to determine whether the developmental environment can modify either the timing of the stages of cognitive development, or the eventual sophistication of the individual's cognitive abilities. In addition, comparable experiments may be conducted in the field on feral populations of ring-necked parakeets Psittacula krameri found in south-east England to establish whether competence on physical cognition tasks varies between individuals hatched in the wild and in captivity.

I am also working with Prof. Graham Martin to investigate the sensory foundations of exploration in parrots, particularly how the cross-modal interaction of the parrot visual field and the tactile bill tip organ inform the individual about the surrounding environment. Additionally, I am collaborating with several people in the School of Computer Sciences, especially Veronica Arriola-Rios and Prof. Aaron Sloman, looking at the cognitive processes and internal representations involved in simple explorative tasks. I am also running comparative studies with human adults and children with Dr. Sarah Beck in the Developmental Group at the School of Psychology.

I graduated from the University of Bristol with a BSc. (Joint Hons) in Psychology and Zoology. Previous research projects that I have worked on have ranged from bat aerodynamics with Dr. Marc Holderied to Andean bear ecology with Dr. Armando Castellanos, and, more recently, cognitive measures of animal emotion with Prof. Mike Mendl and Dr. Oliver Burman.